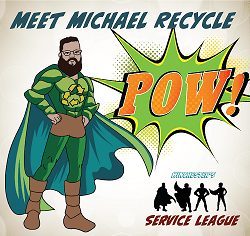 This article was written by Noel King – Writer, Editor, Blogger and Communications Committee Member of the Virginia Recycling Association.

Michael Neese, aka Michael Recycle, is the first of Winchester’s “Service League” superheroes, introduced to earthlings this past year by the City of Winchester’s Communications Team— “They’re super geniuses,” says Neese, who has a not-so-secret superpower that is evident the minute you begin to talk recycling with him: passion.

As the Refuse and Recycling Manager for the City of Winchester, Neese says that although he thinks about recycling 90 percent of the time that he is awake, he realizes his curbside customers typically don’t share that focus, usually forgetting about their trash or recycling once they put it curbside, “so getting their attention to a change is a challenge.”

Although Neese’s staff try hard to educate the public to such changes, such as by placing explanatory stickers on curbside items they cannot accept, Neese says he still receives 12 to 20 phone calls a day from sometimes irritated citizens seeking further explanation.

Rather than responding in kind, Neese says he seeks to redirect the energy of their misunderstanding: “I try to move their anger. I like to think of anger as just passion. They might be focusing that passion on me for the initial moment, but once they understand that you can only put on a truck what you can get off a truck, that this is a state-wide situation, this is an industry-wide situation, this is a United States-wide situation, they get that broader scope and how they fit into it. Then they can take that passion and direct it to the problem and actually solving the problem.”

Neese says his teenage son and daughter share his passion about recycling, resource management, and minimalization: “They’ve been around it so long, they see it.” He says his son quickly grasped the recycling mentality from being a Boy Scout participating in several-day hiking/biking/camping trips in which he had to carry all of his food with him and then carry his trash back out with him. 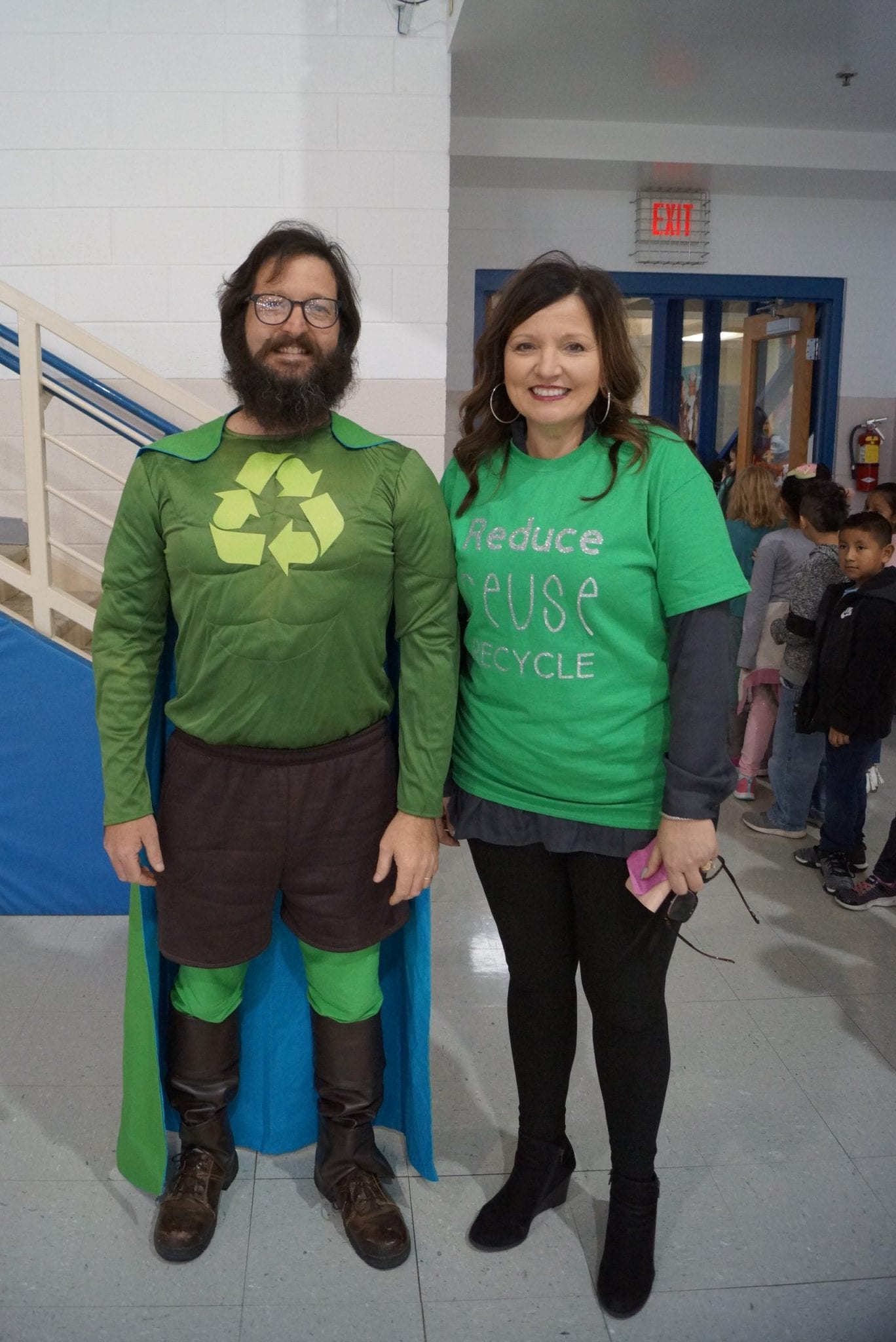 “When you have to carry four days’ worth of trash, before you make that trash, you’re thinking really hard about it. Everything is focused on multi-use; otherwise, why are you carrying that weight? That really sunk it home for him.”

He says his daughter was “a little bit harder to bring on board. She was passionate and she felt for the environment, but to actually take action was more difficult. So I made her wash dishes. After about a week of washing “a LOT of dishes” daily for four people, “she started becoming mindful of what she was using,” realizing “I don’t need a new cup every time I get a cup of water. I don’t need a new plate; I don’t need six pieces of silverware.”

The importance of mindful use is certainly obvious to Neese’s sanitation crews, who service about 11,000 Winchester locations weekly, all on an “old-school manual lift.” In a recent typical 40-hour week, eight sanitation workers collected 146 tons of trash and recycling combined. That means each worker manually collected 36,500 pounds, which averages out to roughly 4,500 pounds per person per week or 112 pounds per person per hour.

Neese is hoping to greatly assist his crews in the near future with the purchase of semi-automated or automated equipment, pending Winchester City Council budget approval.

On a broader scale, he would love to see all of the solid waste of the United States processed and maintained domestically: “It’s our problem, it’s our material, it’s our potential resource. We need to keep that here.”

On the individual level, his vision is for people to be mindful about what they use, purchase, and dispose of and to eliminate single use items. He explains, “There’s no birth/death linear A to B points anywhere that I’m familiar with. Everything is a cycle and nothing disappears. Instead, it begins a new chapter of its life cycle. Everything has that cycle, so being mindful every time something is in our hands and leaving our control [is essential].”

He adds,” There is no magic bullet. When you put all of your resources in one basket, you are creating a huge problem somewhere else. We need diverse baskets; we need diverse options so that there is no single answer but each community, each processing place, each generator of waste is making the best decision for them, as an individual and a collective.”

Whatever the future holds, there seems never to be a dull moment for an R&R superhero. When asked recently by an interviewer what he planned to do for the rest of the workday, a Tuesday, Neese responded, “I don’t know if you can hear the phones ringing in the background, but I will answer them, [take care of] voicemails and emails, and then I’ll probably go out in the field and check on my guys.” 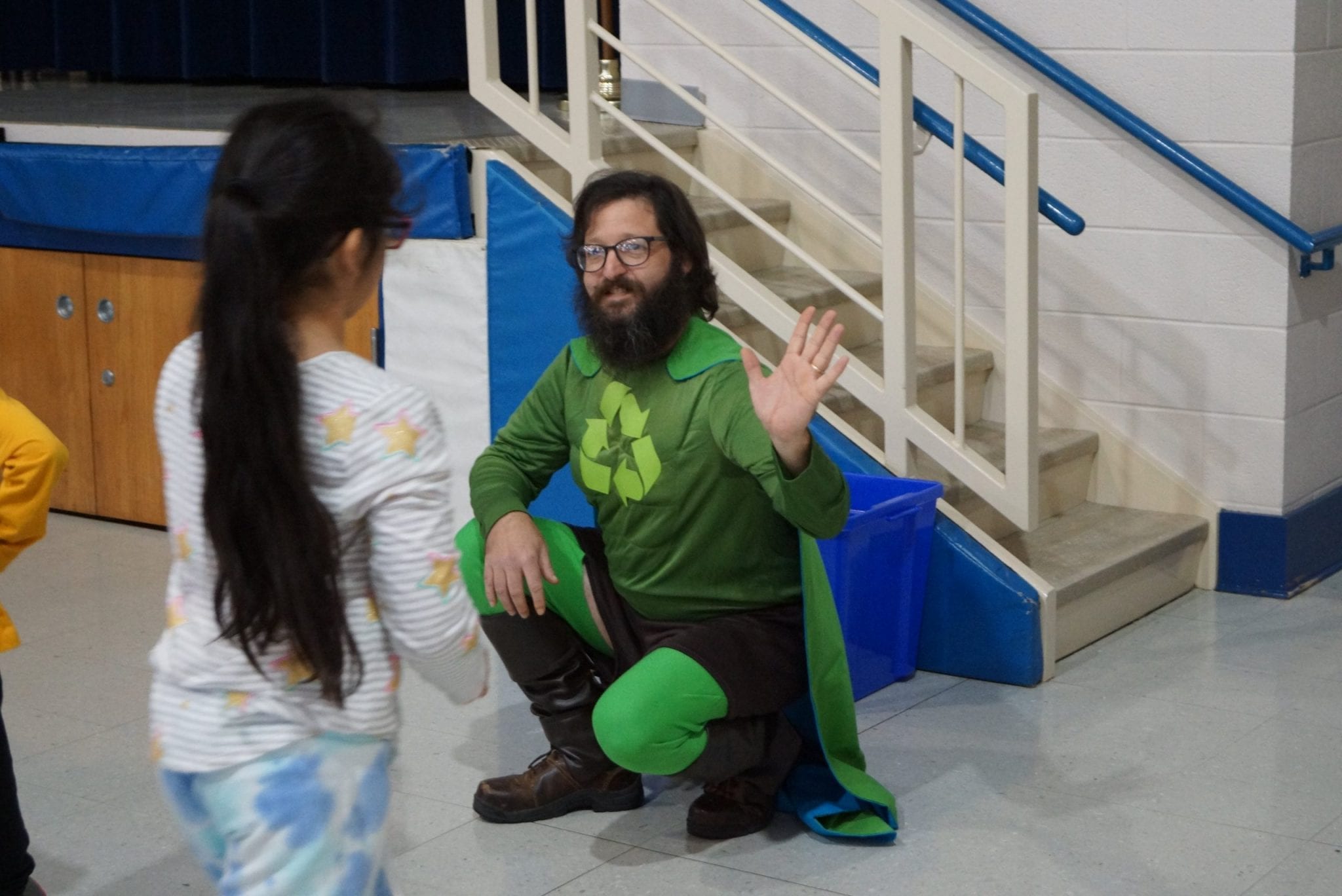 Following that, he said, he would likely work on some schoolwork [he is currently pursuing a master’s degree in Public Administration; his undergraduate degree is in Sustainable Enterprise Management] before preparing for a weekly training he conducts for his staff during the winter months.

Describing himself as being pulled in three main directions at any given time—being a policy and program manager; a telemarketer, email checker, and customer service representative; and a manager of 18 fulltime staff—Neese still fills in as a sanitation worker on his crews as needed, having begun as a sanitation worker his first two years in the business.

Whenever you may feel the weight of the recycling crisis on your shoulders, know that you are not alone. Somewhere … in Winchester, Virginia … there is a man with a superhero costume standing ready to recycle for his community. “It’s a fun position,” says Neese … and he really seems to mean it.